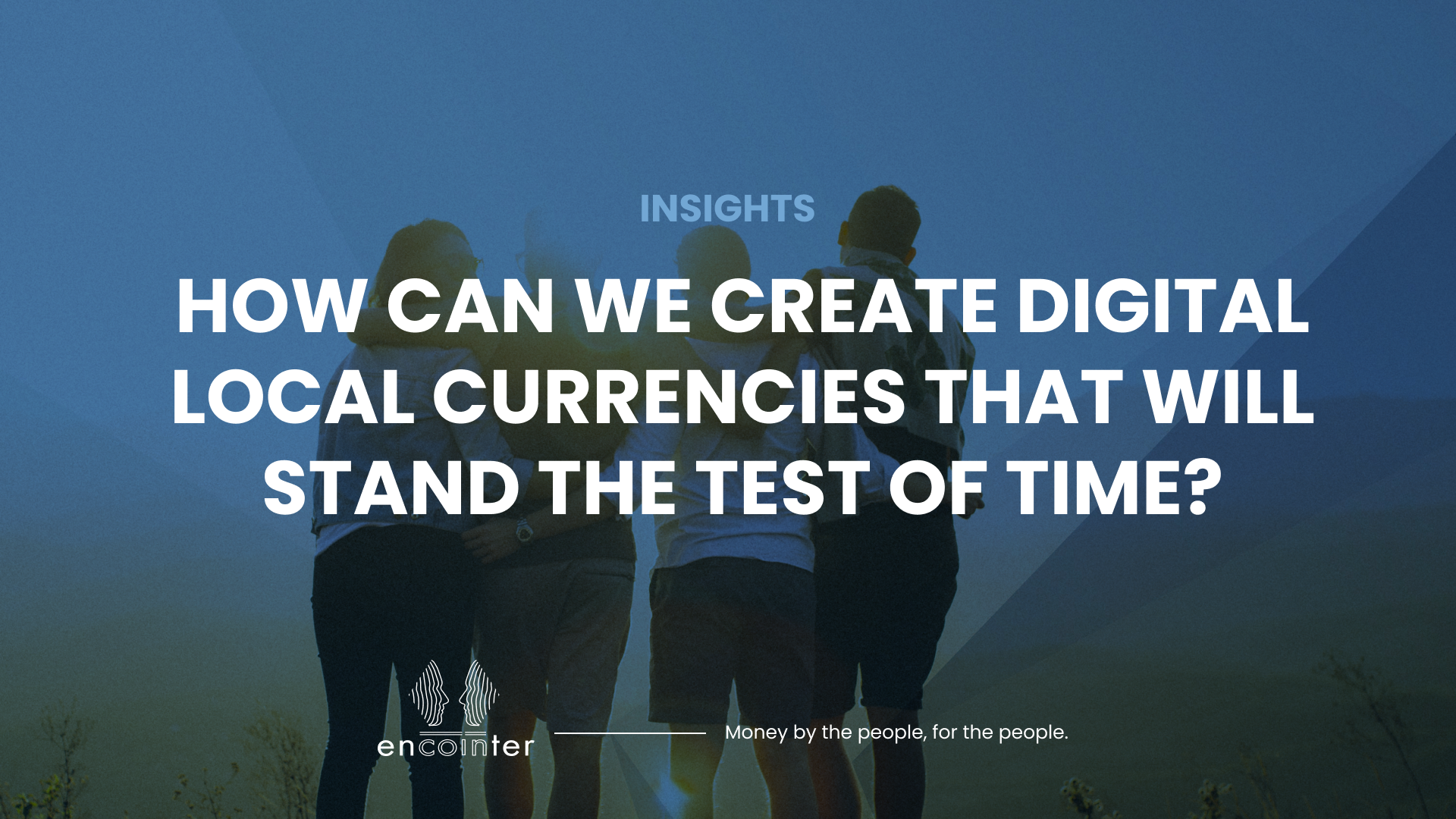 However, despite starting with the best intentions, many of these schemes fail to survive in the longer term. From early attempts like the Ithaca HOUR in New York, to the local value exchange system (LOVES) in Japan, and countless “local pounds” in the UK, examples of defunct local currencies are not hard to find. So why do these initiatives fail to sustain momentum and how can we respond to these challenges when building local digital currencies in future?

Why do local currencies fail?

For any community currency to be sustainable, it must reach the critical mass needed to cover its operational costs. Local currencies have to attract a sufficient number of businesses and users to become successful, but as they grow, operational costs and administration increase. This is particularly true of paper-based currencies, which require significant resources to print, distribute, convert and verify.

Another reason why local currencies fail to gain traction is their utility. Over time, a local currency may gain a reputation as the poor cousin of the official fiat money because it is more restrictive: it can only be used at certain stores for specific goods. If it is one-to-one convertible with the fiat currency, therefore, the economically logical decision would be to convert it to fiat to increase your spending options. While in the developed world, some people might overlook this factor in the short run due to their pride in the local community, this is a choice that few citizens in developing countries could afford to make.

Thus, in order for local community currencies to be an attractive proposition in the long run, they need to increase the purchasing power of participants and thereby reduce their inequality relative to the wider region. This implies that rather than being purchased with fiat, it should be a separate, complementary currency that is distributed to participants either on a one-off basis, or at regular intervals. This has the effect of injecting additional spending power into the local economy, which can help to increase economic activity when fiat is scarce, such as in the final week of the month before most workers are paid, for example.

Could cryptocurrencies be the answer?

At first glance, digital community currencies look like an attractive solution to these challenges. Firstly, digital currency can be generated at far greater speed and lower cost than paper-based schemes. The technology has now developed to the point where there are dozens of platforms on which anyone can mint their own tokens without learning a line of code.

Secondly, digital currency can potentially be distributed in a highly efficient manner given that tokens can be transferred frictionlessly between wallets without the need for an intermediary. In theory, this presents an ideal fit for initiatives that seek to distribute a complementary local digital currency at regular intervals.

So, given these advantages, why aren’t community leaders all over the world leveraging digital assets to boost local economic activity or replace their paper-based local currency schemes?

The cost of cryptosecurity is the first challenge. In general, the security of any decentralized network tends to be proportional to its size. Indeed, the enduring appeal of some of the earliest decentralized networks, like Bitcoin and Ethereum, lies in their relative size and security, which relies on the participation of tens of thousands of validators. But size tends to come at a cost. The average transaction fee for sending an ERC20 token on Ethereum is more than the average daily income of around 60% of the global population, for instance, making it an unsuitable solution for developing communities. Furthermore, the dominant cryptocurrencies were clearly not designed to serve as community currencies. In particular, they tend to have a fixed or deflationary supply, which would make it onerously expensive to obtain and issue at regular intervals.

Needless to say, the cost of starting from scratch and building to achieve vast scale would be insurmountable for any community-led initiative. As a result, it is difficult for any community to establish a new digital community currency that will be sufficiently secure at launch.

A second challenge is the cost of validating the identity of participants. Trust and social capital are at the heart of any local economy and fraud or misuse could be fatal to the credibility of a local currency scheme. But how can bad actors be prevented from claiming a community currency twice under two different identities? Conventional social welfare systems issue citizens with identity cards and documents and are accompanied by a raft of legislation and monitoring bodies tasked with detecting, reporting and punishing fraud. But this is a bureaucratic and costly process and it limits the benefits of the program to those who have a government-issued ID. Proving the unique identity of an individual on a decentralized network is also a highly challenging task, however. In fact, it was identified as one of the “hard problems” in cryptocurrency by Ethereum founder Vitalik Buterin.

How Encointer tackles the challenges

Encointer provides a technical framework that communities can use to establish a digital community currency. Our project secured a place as a common good parachain on the Kusama network. Each parachain on Kusama is a specialized blockchain optimized for a specific use case. What makes Kusama (and its sister network, Polkadot) different from most other major blockchain platforms is that all these unique parachains can share security resources on a common relay chain. In effect, this levels the playing field, meaning that new and emerging blockchain initiatives can enjoy the same cryptosecurity guarantees as far larger projects. This enables newly established Encointer community currencies to offer participants a secure means of transaction from day one, without the need to rapidly scale or pay high transaction fees. Since the Encointer token for each community is adjusted to local purchasing power, fees remain affordable.

The Kusama network provides the necessary security, but we still need a way to prevent identity fraud. To tackle this problem, the Encointer protocol takes advantage of a simple principle: one person can not be in more than one place at any one time. In order to receive their allocation of a community currency, participants need to be willing to attend physical key-signing events, which are small gatherings of participants held at regular intervals. Each user downloads an app and is issued with a unique “proof of personhood” identifier in the form of a QR code. At each event, participants are required to verify their attendance in person by asking another attendee to scan their code. All key-signing events are held concurrently, meaning that no participant can attend more than one event to claim the currency twice. In this way, the Encointer protocol establishes a community web of trust that is simple to understand and all participants can have faith in.

Despite the scale of the challenges Encointer aims to solve, it also aims to be as accessible and intuitive as possible for everyday users. Our first community currency is already up and running, and we were delighted to host the first successful key-signing event for the local ⵐLEU currency in Zurich in May. If you’re interested in learning more about how Encointer could create more value in your community, then please get in touch.